The Current State of the UK Construction Industry

In its 2019 policy paper entitled Construction Sector Deal, the UK Government, stated that the nation’s construction sector, encompassing contracting, product manufacturing and professional services, has a turnover of around £370 billion. As one of the world’s largest construction markets, in an open market economy, the industry provides significant opportunities for internationally-based construction businesses seeking export sales in the UK. In terms of imports, it is estimated that between 20% and 25% of all construction products are imported. In February 2020, the official UK government monthly statistics estimated that 67% of all construction product imports came from countries within the European Union.

The industry consists of over 300,000 firms, employing around 2 million people in a range of roles. It can be defined as one which embraces construction materials and products; suppliers and producers; building services manufacturers; providers and installers; contractors; sub-contractors; professionals; advisors and construction clients; and those organisations that are relevant to the design, build, operation and refurbishment of buildings.

Currently, the industry is enjoying a term of prolonged growth, although recently this has been interspersed by intermittent short periods of low growth/stagnation resulting from uncertainty surrounding the UK’s departure from the European Union. The longer-term period of growth is buoyed, in part, by a significant housing shortage, and also by substantial public and private investment in infrastructure and the commercial construction sectors, such as the government’s recent approval for the construction of a £100bn+ (predicted) High Speed Rail (HS2) network linking London with Birmingham, Manchester and Leeds.

Because it is one of the main drivers of construction activity it is worth expanding briefly on the continuing, and substantial, under-supply of new housing across the UK. The National House Building Council (NHBC) said 161,022 homes were registered in the calendar year 2019. This figure is significantly short of the UK government’s ambition to facilitate, by the mid-2020s, the creation of 300,000 new homes every year, which it believes is needed to meet the projected demand. This demand, combined with political pressure on housebuilders and local planning authorities, is expected to underpin construction activity in the residential sector for the next decade and beyond.

Looking ahead (from Spring 2020), the industry’s forecasts paint a cautiously positive overall picture, since the UK’s departure from the EU construction industry has provided a degree of certainty to businesses across the sectors. A brief summary of the comments from the some of the mainstream surveys is provided below:

Barbour ABI are one of the leading providers of construction project data in the UK and, as part of their activities, they produce this comprehensive monthly analysis of the market which provides a thorough breakdown of current and forecasted activity, according to the following construction sub-sectors: residential; infrastructure; commercial & retail; hotel, leisure & sport; industrial; medical & health; education.

In February 2020, their commentary on the latest data re-enforced the generally positive, but cautious, sentiment: “January’s strong contracts awards data suggests construction industry activity may be starting to respond after a clear general election result and the UK’s exit from the EU finally occurring, even if it is largely symbolic at this early stage. Whether the fog of uncertainty descends again as the upcoming UK-EU talks commence remains to be seen. Positive signs, such as the approval of HS2, indicate growth for the sector but at the moment it is too soon to tell whether January’s increase will convert into a sustained boom for the industry.”

Economic forecasters Markit and The Chartered Institute For Purchasing and Supply produce the monthly PMI data for UK construction. We publish details every month on our News pages. At the time of writing (March 2020), the latest release ran under the headline “Sharpest Rise in Construction Output Since December 2018”. Specifically, the survey found that new orders increased at the fastest pace since December 2015, and that housing and commercial work had underpinned the rebound in activity.

The release said, "There were widespread reports that pent-up demand released since the general election had helped to boost workloads, especially in relation to house building and commercial construction projects. Civil engineering activity moved another step closer to stabilisation in February. A number of survey respondents commented that contract awards from HS2 and other major transport projects had the potential to boost infrastructure work at their businesses in the year ahead”.

The RIBA produce this monthly survey monitoring the business trends affecting the architectural profession and forward-looking sentiment of architects themselves. Since the prevailing workloads of architects represent a good predictor of future construction activity, this RIBA survey provides an important barometer for all industry sub-sectors.

We publish details of the survey every month on our News pages. At the time of writing, the latest release (February 2020) reported that the index had “…surged into positive territory for the first month of 2020”. In reference to some of the key sub-sectors it reported that “…..the private housing sector rose significantly…” and “the commercial sector returned a positive balance figure for the first time since May last year”.

CPA is the UK’s leading trade body for construction product manufacturers/suppliers. Amongst its activities, it publishes a quarterly State of Trade Survey. In January 2020, it reported on its latest findings, commenting that “Manufacturers retain a positive, yet cautious view for the next 12 months that will encompass the UK leaving the EU and negotiating trade agreements during the transition period to the end of December.” 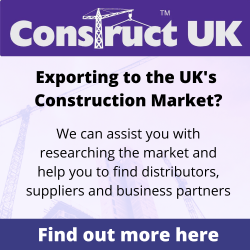