Specifiers are inundated with product literature – hardcopy or digital – and it is essential that literature is correctly classified and dated to ensure correct storage and easy retrieval. The date and classification code should usually be clearly visible on the front cover of the literature, and preferably, on the top right hand corner. 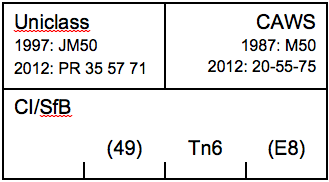 If literature is CPD-rated (see CPD Certification and Marketing), this information should also be clearly indicated on the front cover. In addition, any references to British and European Standards, building regulations and applicable accreditation schemes should be clearly stated inside the publication, since this will add to the authority of the product or service, and also provide valuable information.

CI/SfB is still a widely-used construction industry classification system in the UK, is commonly used throughout Europe, and occasionally it is found in use in other countries in the world. This is a long established system which accounts for its wide use, but was last updated in 1976 and does not reflect changes in the industry, such as performance issues, new technologies and materials. Consequently it has been superseded by UNICLASS, which was launched in 1997. Some architectural practices still use CI/SfB so the transition is likely to take some more years yet so it is expected that it will remain in common use for the foreseeable future.

CI/SfB classifications use specific indicative codes that appear in one of four boxes. References are based on five tables which then fit into the four boxes.

Table 0, Box 1: Physical environment (such as bathroom or kitchen).

Tables 2 and 3, Box 3: The form of the product and the material it is made from.

Table 4, Box 4: Non-objects (such as administration, cleaning, and so on).

Most construction products do not enter data in all the boxes, Tables 0 and 4. The RIBA Product Selector provides an index of subjects/product categories organised by CI/SfB.

Note: CI/SfB stands for construction industry (CI) and the Swedish ’Samarbetskommitten for Byggnadsfragor’ (SfB), which roughly translates to the ‘Joint Working Committee for Construction Issues’.

The UNICLASS2 classification system, which provided a logical platform for Building Information Modelling (BIM), was launched in April 2013 for use and review in live projects. UNICLASS2 remains freely available via the CIPC website, which, at the time, described the development as follows: "UNICLASS2 offers a searchable application that provides unified tables for structured information at key levels including complexes, activities, spaces, entities, systems and work results. Tables for other information sets will be added. Replacing the current UK standard classification UNICLASS, UNICLASS2 has been developed, with full industry consultation, by the UNICLASS working group of the Construction Project Information Committee."

UNICLASS2 features increased scope, depth and consistency of information, covering all aspects and disciplines of the built environment, including infrastructure and process engineering. The Chairman of the CPIC said, “For the first time ever, the UK has a unified classification system that can structure how construction project information is accessed, developed and maintained. We want to ensure the system is constantly improved so if people can’t find what they are looking for, we want to know.”

In 2015, a further development was announced with the release of UNICLASS2015, which, according to the CIPC website “is now cited in the UK National foreword to ISO 12006-2 Building construction – Organisation of information about construction works as the UK response to that International Standard. This has the important effect of elevating its status from that enjoyed by previous versions of UNICLASS.”

Earlier, in 2014, CIPC passed its intellectual copyrights in UNICLASS and the development work for UNICLASS2 to the UK Government "for beneficial and government backed and financed development and completion for use with BIM". This, in turn, resulted in the UNICLASS2015 classification within the BIM Toolkit published by NBS.

Common Arrangement of Work Sections for Building Works is only used in Britain and is designed to link the activities of the architect and other designated professionals involved in the same project by using the same reference code for each work section. It was first published in 1987 and was updated in 1998 to align it with Uniclass. CAWS has since been incorporated into Table J of Uniclass.

The RIBA Product Selector provides an index of subjects/product categories organised by CAWS.

The following publications are available. Click on the titles for further details and to order:

The Common Arrangement of Work Sections for Building Works

Despite the now dominant use of digitally based sources of product and technical information, hardcopy literature still remains an important form of publication by specifiers referencing specific product data. This may, and probably will, change in time, but not yet. We have covered this topic in our construction literature design feature and specialists in the field, CDP, have contributed a comprehensive paper on the subject specifically to aid construction product manufacturers. This is entitled, Less paper, but not paperless... the continuing importance of good technical literature.

There is a number of agencies specialising in literature design and classification for the construction industry. We have researched around 20 such firms in our database, which can be downloaded here (you must be logged in to access this).