There are hundreds of different journals, magazines and periodicals covering all sectors of the construction industry, and varying widely in audience profile, circulation and editorial content. Despite digitalisation, many of these still also appear in hard-copy format.

We have identified over 330 of these publications, selected to represent a comprehensive listing of the leading titles from across the industry, including the house journals of many industry bodies and associations. The information provided will help the marketer to choose the most appropriate title(s) to target any given sector or professional discipline, and includes circulation levels (where possible), audience profiles and contact information (for both the sales and editorial contacts). The database may be downloaded here (you must be logged in to access it).

The Relevance of Construction Trade Press

Unsurprisingly, given the considerable change in the methods of disseminating construction information, this is a subject which has been considered for some time by various commentators. More than a decade ago, back in 2009, CIMCIG and IBP (International Building Press) held a debate entitled 'The Future of Construction Media' where journalists Nick Edwards (Construction News), Stuart MacDonald (Inside Housing) and Niki May Young (World Architecture News), amongst others, discussed the changing relationship between printed and digital content delivery. The general consensus among panel members and audience was that both paper-based and online media have a future in the world of construction publishing – in the short- to medium-term at least – but with an ever-growing shift towards online. At that time, the general consensus amongst the panel members (it wasn't unanimous) and audience was that printed construction media had a future in the industry – again, in the short- to medium-term – but with an ever-growing shift towards online. Fast-forward ten years and it seems that consensus was proved correct, in fact it would appear that not much has changed.

As we compiled the index of construction journals in 2021 it became clear, once again, that many of the 350+ total were still being produced in hardcopy format and the trend to digital/online has also continued with a majority of titles being produced in both formats, but with a continuing shift towards online. Recent commentaries have also supported the status quo. In 2017 Ridgemount PR looked at some of the research for that year’s edition of the Construction Media Index (CMI) and commented “Perhaps the most surprising characteristic of the print journals is their tenacity. Despite two decades of the limitless resources of the internet we are still reading them. In some audience groups (look particularly at architects) readership of print journals has remained pretty consistent since the first CMI research in 2011”.

Perhaps just one example of this ‘tenacity’ could be Construction News. Back in 2015, an article in the Guardian (5th October) provided a report concerning Top Right, the owners of the EMAP portfolio which includes Construction News. The Chief Executive, Duncan Painter, was quoted as saying, “We are at the final stage of the conversion [of readers] from print to digital...... Across the Emap portfolio 67% of revenues are from digital and events. Over the next 12 to 18 months all of the titles will become digital-only.” A year later, in July 2016, Construction News announced that, for the duration of the summer only, the weekly journal would be produced in digital-only format. After that summer, the print edition of Construction News returned and has remained since.

It seems logical to suggest that the fortunes of the printed journal are likely to mirror those for printed literature for the foreseeable future. In this connection, construction literature design specialists, CDP, have produced a comprehensive paper on the subject for construction product manufacturers. Entitled Less paper, but not paperless ... the continuing importance of good technical literature, the paper argues that the demise of printed marketing communication material has been predicted for 20 years, yet, despite this, it remains very much alive and well.

A further valuable resource is Insynth’s Digital Construction Media Guide which offers an unbiased grading system that ranks 52 of the UK's top architectural magazines on their circulation, social media following, domain authority, spam scores and other factors, helping the industry’s marketing professionals understand which publishers will help them achieve their digital PR and advertising objectives. The guide can be accessed free of charge from Insynth’s website here. 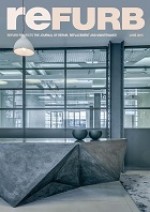 About Refurb by Sheen Publishing Ltd First published in 1987, Refurb is the leading journal covering the vast and expanding repair, maintenance, refurbishment, restoration and...